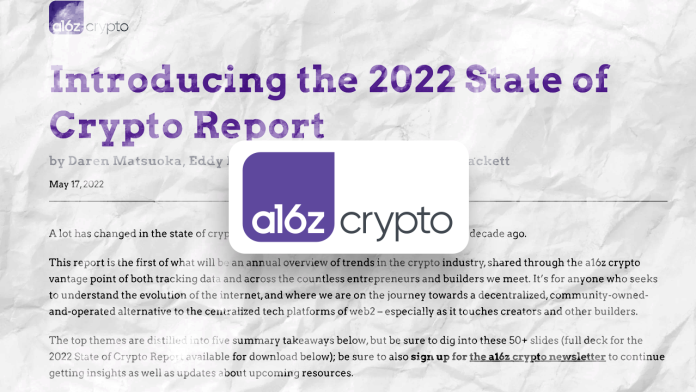 tl;dr Summary: a16z, one of the largest Venture Capital firms in Web3, recently released its state of crypto report. The report comes at a turbulent time in Web3 where prices of crypto have been slashed, networks are failing, and the appetite for digital assets seem to be fading. In their report, they reiterate areas of web3 they continue to be excited about. The report provides a much needed step back, giving a by-the-numbers look at current trends and highlighting just how much room for innovation web3 technologies still have.

Venture Capital firms like a16z have been a major stimulant of innovation within the web3 space. As one of the largest investors of web3 companies, a16z has driven the growth of notable technologies such as Uniswap, Sky Mavis and Solana.

The release of the report is interesting for two main reasons:

With these factors in mind, the question on everyone’s mind is whether web3 will see a pullback from Venture Capital firms or will the party go on?

a16z’s report outlines why the major web3 proponent doesn’t plan on backing down but plans to lean even deeper into the promising space. With the announcement of their 4th $4.5 billion fund on May 25th, 2022, it seems the firm’s sentiment aren’t merely words. Below we discuss the major highlights of the report and dig deeper into why the fund remains excited by web3.

The central theory to a16z’s near-term optimism around web3, despite recent challenges, is this idea of innovation cycles. By looking at the trends between market cap and developer activity you can see this correlation between their trends.

When market cap goes up, it breeds interest from developers which eventually becomes entrepreneurial ventures.

On the layer 2 level, a16z highlights the growing trend of Zero-Knowledge (ZK) Rollups, a breakthrough technology that improves the scalability of layer 1 networks. While there are other methods for improving scalability on layer 2 such as Plasma and Validium. Activity over the last year has illustrated that the majority of layer 2 activity is taking place on ZK Rollup and Optimistic Rollup scaling solutions.

a16z sees these layer 2 solutions as a major driver of adoption, bifurcating the responsibilities of security and scalability between layer 1 and layer 2 respectively. This competition on layer 2 is demonstrated by the multitude of layer 2 networks that are driving down the cost of common activities such as sending crypto or exchanging tokens by as much as 99%.

a16z examines the world as a whole and showcases an underserved population of people who have access to mobile and internet capabilities but do not have bank accounts. DeFi’s growth over the last couple of years shows the potential for a new financial system that could solve for the changes of cross-border payments and democratize reliable financial systems for people to transact on.

Moving onto the topic of stablecoins, a16z points out the increasing demand for a digital dollar over the last couple of years with tokens like USDC and Tether getting a significant portion of the market share. While the utilization of each stablecoin varies significantly by coin and network, the underlying signal that the data shows is that people want digital currencies and will continue to use them into the future.

In the world of NFTs, a16z points out a diversification in the offerings and benefits that NFTs bring to the creator economy. This is especially true when you compare in contrast the revenue split provided by traditional web2 creator platforms compared to web3. Despite volatility in the NFT marketplace and trading volumes, overall trading volume on NFTs showcases continued interest in the digital assets. a16z’s report sees NFTs as a major frontier of innovation for web3 in the near-term.

On the gaming front, web3 has experienced a rising tide effect. With the explosive growth in video games over the last two decades, developers have just begun to figure out effective ways to integrate with games. a16z’s report showcases NFT land as a successful example of these two worlds colliding. With NFT land sales totalling nearly $2 billion, web3 is just scratching the surface of what it can do with gaming.

a16z illustrates just how popular DAOs have become. With over $10 billion in assets under management, DAOs have become a serious way for groups to make decisions in a bottom-up manner. By holding the majority of the DAO’s value in their native governance coin, DAOs continue to provide enticing ways for individuals to engage with communities of all kinds.

With all the activity in the world of web3 over the last couple months, this report provides a very welcome step back. Despite not being at its highest highs, it is clear from the numbers in a16z’s report that the outlook on crypto and web3 still looks promising. If there is one thing to take away from their report, it is that these technologies are still early. Crypto and web3 have garnered a lot of attention from their accomplishments so far but they still have a long way to go. Innovations come in cycles and a16z believes that this next wave of web3 inventions will be big.