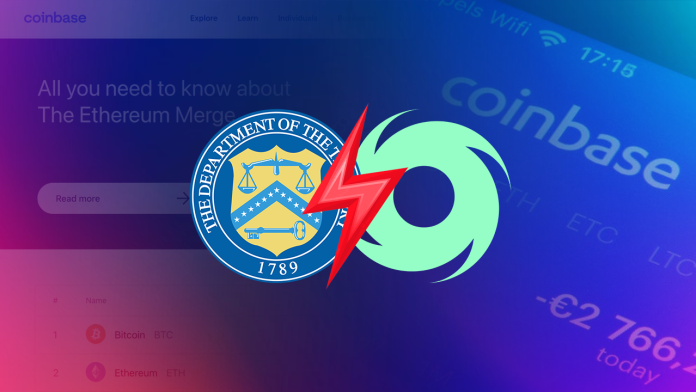 tl;dr Summary: Coinbase is sponsoring a lawsuit filed by six individuals challenging the U.S. Treasury Department’s sanctions against Tornado Cash smart contracts and requesting that the Court remove them from the U.S. sanctions list. According to the lawsuit, OFAC exceeded its authority granted by Congress and the President by punishing open source technology rather than sanctioning the criminal actors who used it.

Coinbase, the largest U.S. crypto exchange by trading volume, recently came out in support of six individuals, including Coinbase workers, that got banned by the Treasury’s Office of Foreign Assets Control (OFAC) in August.

Tornado Cash and other mixing services obscure crypto transactions, making them anonymous. The Treasury Department claimed that North Korean hackers and other criminal actors used this business to launder more than $7 billion in digital currency over the last three years.

“Sanctioning open source software is like permanently shutting down a highway because robbers used it to flee a crime scene,” says Brian. He adds, “It ends up punishing people who did nothing wrong and results in people having less privacy and security.”

The Treasury’s decision to blacklist open-source software rather than a company or person was unprecedented. Crypto supporters have complained that the measure is an overreach, establishes a new legal precedent, and could harm the tech industry.

“These sanctions represent a significant unauthorized expansion of OFAC’s authority, and they have harmed innocent people seeking to legitimately protect their privacy and security using this technology,” says Paul.

Grewal explains that Congress authorizes the President to freeze and ban transactions with anyone considered a threat to the United States. This power is delegated to the Treasury to issue sanctions but is meant only for persons or their property.

Since Tornado Cash is neither a person nor a property (property implying possession of an individual or a group), the OFAC exceeded its authority to issue sanctions.

This challenge aims to get OFAC to remove these crypto addresses associated with software off the SDN List, allowing U.S. citizens to use this privacy technology again.

Brian feels that being one of the largest companies in crypto, Coinbase must take the lead and responsibility to stand up and defend this industry. “It’s not enough to just say we disagree and sit on the sidelines. That’s why we’re funding and supporting this lawsuit,” he says.