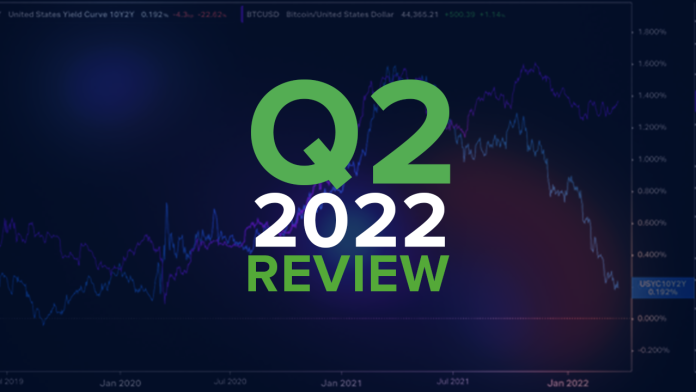 tl;dr Summary: To say that the second quarter of 2022 was a volatile quarter would probably be an understatement. The economy officially entered a bear market and crypto was definitely no exception. The total crypto market cap dropped below $1T from its $3T record in November 2021 and most coins from meme to mainstream are down over 50%.

The crypto market experienced one of its worst quarters in history. The overall crypto market cap fell by over 50% during the quarter dropping below a $1T market cap. This stands in stark contrast with their record high $3T market cap set in November of 2021. DeFi was particularly challenged this quarter and saw Total Value Locked reach 12 month lows of $89 billion compared to $154 billion at the end of July 2021.

Despite these challenges, venture capital continued to pour money into the space, totalling over $15 billion into Web3, blockchain, and crypto related startups. Firms such as Andreessen Horowitz and Sequoia Capital continue to remain bullish on the potential innovations that these new technologies can bring. Collectively, the two firms launched over $5 billion in fresh capital across two new funds to help further lean into this bet.

While there are many details and stats that we could highlight about crypto and Web3 this quarter, the myriad of news that help to contextualize these stats will be the focus of this article. To that end, below is a quick pick of some of the most captivating events that happened during this volatile quarter.

Terra’s LUNA, the top-10 cryptocurrency, and UST, the top-3 stablecoin, have evaporated and are now worthless.

Several DeFi projects are nearly (or are) dead.

Traditional financial markets are in trouble with rising inflation and increasing rates.

Despite all the bad news, there are several important fundamental factors.

The Wacky World of Web3:

While this is by no means a comprehensive list, hopefully it gave you a quick snapshot on how active and diverse the activity in Web3 has been. Q3 of 2022 is shaking out to be a critical moment for crypto and blockchain technology. On one hand, we have a slowdown in both the wider economy and crypto, but on the other, we have a myriad of venture-backed projects that are ready to burst onto the scene.

In a16z’s recent “State of Crypto” report, they stated the cycle of innovation that crypto follows: when the crypto market goes up it attracts innovative talent. And with that talent, comes interesting technology that restimulates intrigue and valuation of crypto. As we monitor crypto over the next few months, we will look for innovations that reinvigorate that intrigue and excitement for the space.