DeSci: What is decentralized science? 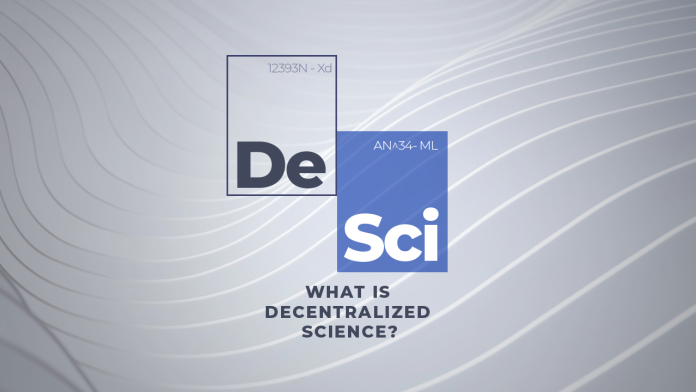 There has been a recent movement coined by the term ‘DeSci’—which stands for Decentralized Science. It refers to a growing number of scientists and innovators utilizing blockchain technology, tokens, and smart contracts to improve upon the legacy processes of science.

The main areas that DeSci aims to improve are largely centered around how scientific research is funded, how the information is shared, as well as shifting ownership away from intermediaries to reduce the friction/cost of conducting research.

These are all the usual disruptive themes we’ve seen Web3 enable throughout a variety of industries, but the scientific world has a lot of room to improve which is why it’s being highlighted.

Imagine a world where these key problems are solved:

These are some of the core issues that using blockchain technology could assist within the scientific realm. Let’s dive into each of these a bit more.

One of the greatest pain points for scientific research is the funding aspect. Scientists often complain of spending a majority of their time writing up grant proposals and often run out of funding mid-way through their trials and experimentations.

The ability to get funding is often tied to metrics such as the h-index, which quantifies the impact of a scientist’s published work. Incentive structures like these guide research down a specific path because they need to continue producing work that will get the funding, and thus the hamster wheel continues.

There are plenty of arguments against these types of incentive structures claiming to be harmful to the scientific process and having the ability to experiment. This could lead to issues like duplication of work or misaligned incentives purely focused on getting citations (people linking back to the research). What’s even more alarming is that the vast majority of publications don’t publish studies that had a negative result in the experiment. This means studies that were wrong or no correlation was found often aren’t being openly shared which can skew the research.

With new forms of funding coming about in the Web3 space, we hope to see adoption take place in areas that help improve society at large. One such example is Gitcoin, which uses  quadratic funding (a more democratic and scalable form of matching funding for public goods, i.e. any projects valuable to large groups of people and accessible to the general public) to fund projects through their platform.

It’s similar to the idea of crowdfunding platforms like Kickstarter or Gofundme but for public goods. It also has full transparency on the blockchain, little to no intermediary fees, and operates with all of the efficiency gains of cryptocurrency.

Having transparent and open access to scientific research is really what should be at the heart of this movement. Scientific knowledge itself is quite literally one of the MOST obvious variations of a public good. Unfortunately, there is a lot of scientific knowledge that doesn’t see the light of day because it is placed behind paywalls, sold to private corporations, or stuck inside of private databases.

There are a lot of supporters for the movement to make science more open and collaborative, including mandates done by some of the major funding sources and entities like the National Institute of Health.

By allowing for transparent funding and open-source research to be published we greatly reduce the need for intermediaries throughout the process.

This allows for a world where science can adopt some of the innovative properties of Web3 including transparency, efficiency, immutability, and collaboration.

We are already starting to see examples of this happening with research groups auctioning off NFT’s to fund their work or DAO’s that are operating with these principles in mind.

Research Hub is an organization whose mission is “to accelerate the pace of scientific research. Our goal is to make a modern mobile and web application where people can collaborate on scientific research in a more efficient way, similar to what GitHub has done for software engineering.”

Researchers are able to directly upload articles on the site, summarize the findings of the work in an attached wiki, and discuss the findings in a completely open and accessible forum dedicated solely to the relevant article.

How to educate yourself further on DeSci

In true Web3 fashion, one of the best ways to continue education in a particular area of interest is to get involved with a community that shares the same interest.

One great community resource called The DeSci Wiki is being led by Dr. Jocelynn Pearl. It’s a place to get up to speed on projects in the space.

Feel free to look into The Blockchain For Science for more amazing information on the subject.

On Discord, you can pop in and see what’s happening over at Opscientia and DeSciWorld.

An amazing article outlining DeSci was also written by Sarah Hamburg which you can check out here: https://future.a16z.com/what-is-decentralized-science-aka-desci/

Lastly, some DAO’s I would look into include:

This should give some good starting points to be able to examine the movement of Decentralized Science, understand its importance, and be able to dive deeper if it is of interest!