Limewire Is Making A Comeback – But Not Like You Think 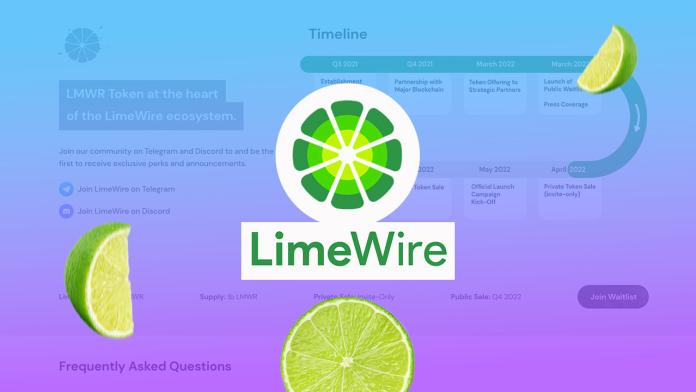 tl;dr Summary: LimeWire, a popular peer-to-peer music sharing service from the early 2000’s, will be relaunched as a music-centric NFT marketplace. LimeWire aims to create an easy-to-use marketplace which combines the simplicity of Web2 UI/UX with the benefits of digital ownership and authenticity offered by Web3.

In March of this year LimeWire, the notorious peer-to-peer file sharing software once synonymous with pirating movies and music, announced that it was making a comeback as a mainstream marketplace for digital collectibles. Initially, their marketplace will focus on music and other audio-visual collectibles but the team has plans to expand beyond that in the future.

LimeWire was taken down in 2010 after a lengthy court battle with the Recording Industry Association of America (RIAA) over copyright infringement. However, in that time, the LimeWire software and brand had become a beloved staple for its 50 million active users. Peer-to-Peer networks like LimeWire were revolutionary in their hayday because they allowed users to share their photos, movies and music files with the rest of the network. This is the same model which later influenced blockchain technology like Bitcoin. However, instead of a shared database of movies and songs, Satoshi wanted Bitcoin to store with each node an ever-growing transaction record without any chance of tampering or revision.

The success of LimeWire forced record labels and major studios to accept that the internet was changing the music industry. Fans no longer wanted to spend $15 for a CD with two or three songs they actually wanted to listen to. This led to the rise of the iTunes Store and later on major streaming services like Spotify which allowed for a far more curated listening experience for users. Blockchain technology and NFTs create even more avenues for supporting musicians and LimeWire hopes to be the bridge that brings mainstream users into Web3.

Co-CEO’s Paul and Julian Zehetmayr, a pair of serial tech entrepreneurs, acquired the LimeWire brand in 2021. Their plan with LimeWire isn’t to replace streaming music giants, but to give fans an alternative way to support and get closer to their favorite artists.

“We’ve seen across the industry that there is a hunger for taking back control and ownership, and we are here to make that happen for artists and creators,” they said. “We see NFTs as collectibles just like vinyl, and we believe the market needs a brand like LimeWire to take the concept of owning digital collectibles mainstream.”

LimeWire plans to do this by releasing an easy-to-use NFT marketplace with a mission to empower artists to sell records, music-related art and other collectibles directly to fans and followers. Their new digital marketplace, launching in Q4 2022 on the Algorand blockchain, aims to be an easy to use platform allowing mainstream users to purchase digital collectibles without any pre-requisite technical knowledge about NFTs, and even without the need to own any cryptocurrency. These digital collectibles can be anything from an unreleased demo of a song, album cover artwork or an autographed guitar sold as an NFT. These NFT’s will be purchasable directly on their website without needing to download a crypto wallet. This makes LimeWire’s NFT marketplace similar to any other online marketplace most consumers are familiar with, significantly lowering the barrier to entry.

The LimeWire team chose the Algorand blockchain, a direct competitor of Ethereum, for storing their digital collectibles. The Algorand platform is designed to process many transactions quickly, similar to a major payments processor like Mastercard or Visa. The main difference with Ethereum is Algorand’s Pure Proof of Stake (PPoS) consensus protocol which is more energy efficient and arguably more decentralized than Ethereum’s current Proof-of-Work (PoW) model. However, while Algorand will help LimeWire develop a simple and elegant user interface to drive mainstream adoption, LimeWire will also provide cross-chain bridges which enable experienced users to move their NFTs to other popular networks like Ethereum and Polygon.

LimeWire is also making major strides with mainstream record labels after inking a deal with Universal Music Group for content licensing on a global scale, opening up the LimeWire collectibles marketplace to all artists under the Universal Music Group umbrella. This includes artists such as Drake, BTS, Billie Eilish, Taylor Swift and many more. The LimeWire marketplace will offer fans a new way to engage with some of the biggest stars in music and gives the artists additional avenues for creating revenue aside from streams and live performances.

In addition to music-related NFTs, LimeWire’s roadmap includes a slew of new features including: