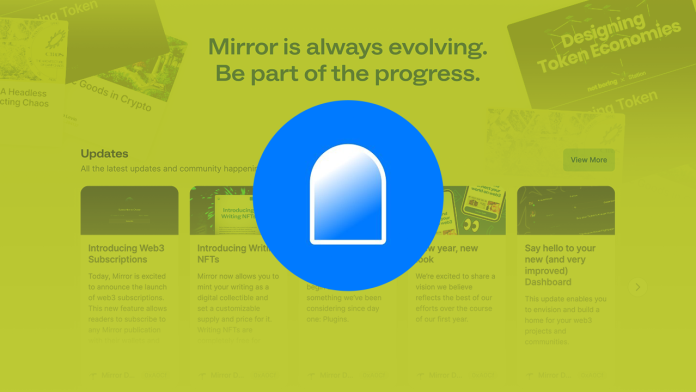 tl;dr Summary: Mirror.xyz is a web3 take on blogging platforms. It allows users to own their content, build a community, and monetize it in a far more engaged manner than Medium and Substack. In a creator economy, having tools that help engage your community is everything. Mirror.xyz’s web3 features may provide a solution to aspiring writers looking to grow a following.

The impact of the 2008 great recession was a failure of numerous safeguards but most notably it was a failure of industries controlled by the few instead of the many. Launched in 2009, Bitcoin is a representation of this frustration with large institutions, built with the intention to disrupt and decentralize our financial systems.

While the vision originally started with financial systems, the ideology of decentralized systems has permeated throughout a swath of industries. Whether this be in art, healthcare, or even insurance, web3 seems to have no intention of leaving any industry untouched.

So if decentralization is attempting to make it into every industry, why is it coming to writing/publishing? What problem is it trying to fix? And why do people want it to happen?

The Problem it is Solving

Unlike other industries, the media has done a better job than most at democratizing access to information. Whether that be through blogging sites like Medium and Substack, social media like TikTok and Instagram, and traditional publishers like The Wall Street Journal and The New York Times, writers and consumers alike have a multitude of options.

Despite these advantages, the writing/publishing industry does have some flaws. Whether that be the way they are paid, the ownership of their work, the connection to their readers, or their ability to begin new publishing ventures, writers are often put into the difficult circumstances of choosing a platform that fixes some of these issues but not the others.

These incomplete solutions are exactly where Mirror.xyz is trying to play. If you write for an established publisher, you often have to give up the autonomy and rights to your writing in order to receive a more stable income. If you are a solo blogger, you are often giving up access to a consistent audience and income stream in favor of ownership and freedom.

Sure, if you grow an established reader base as a solo blogger then the income stream can be a bit more consistent. But for many, this ideal state is far out of reach.

While there are platforms like Medium and Substack that have tried to democratize writing, they often fall short when it comes to monetization and building an audience.

For Medium, it struggles to fairly monetize content since it takes a 50% share of the money it makes from paid subscriptions. Given that Medium has over 700K subscribers according to Axios and the monthly cost of a subscription is $5, the company is only distributing roughly $1.75M of the $3.50M it makes a month to the hundreds of thousands of writers on their platform. This collectivist approach, while good at creating exposure for relevant and high value content, is hardly fair payment to writers.

This model contrasts with Substack, another popular blogging platform, which has a more individualistic approach to paying writers. While subscribers to Medium have readers pay Medium for access to articles, Substack has readers pay subscriptions to individual writers. By only taking a small 10% cut of the proceeds received, Substack focuses on the fair pay of individuals but not on the tools to promote their content like Medium has.

This is where Mirror.xyz and the innovative solutions that blockchain technologies provide come in. On the surface, Mirror.xyz may seem like a standard copy of Medium or Substack, but the functionality it unlocks for growing a following and monetizing content is next to none.

On top of having a top-notch blogging interface, Mirror.xyz comes equipped with a few enticing features:

So is Mirror.xyz a panacea for the challenges the writing community has been facing with owning content, growing a following and monetizing it? The answer is yet to be seen. While emerging Web3 writing platforms have been marketed as decentralized solutions, the real concerns of writers seem to be less about the fear of content being taken down and more on the tools that a web3 platform can provide content creators.

While it is nice to know the content you host and own will remain up no matter the feelings, rules, or restrictions an organization might have, the real value of Mirror.xyz and the growing list of DeFi writing platforms seems to be in web3’s ability to monetize and grow an audience.