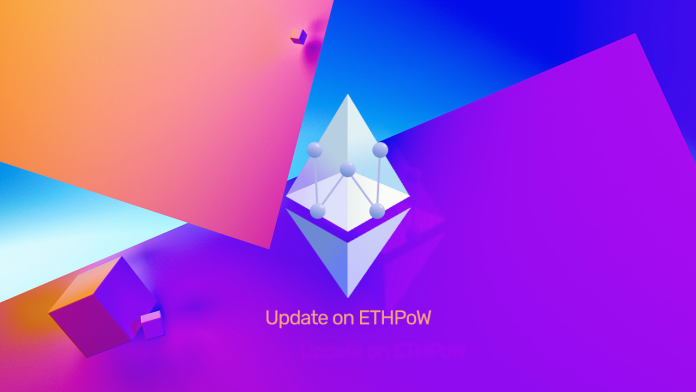 tl;dr Summary: The new Ethereum fork initially saw a surge in its token price but has fallen consistently due to heavy sell pressure. The price now seems to have settled, having dropped by 95% from its all-time high of $141 in August.

ETHPoW is the name given to the new hard fork from the Ethereum blockchain following the merge event, which changed Ethereum to proof-of-stake (PoS) and removed its dependence on miners.

A group of Ethereum proof-of-work (PoW) miners came together to fork Ethereum to continue using the original consensus process, resulting in the creation of ETHPoW.

The new ETHW token jumped from $35.4 to $60.68 shortly after the merge, representing a 70% increase in less than five hours, according to CoinMarketCap data.

Following the merge, ETH also saw a significant selloff as it fell by over 18% from its pre-Merge value. Part of the reason was the heavy selloff of the ETH tokens by the miners awaiting a big payday following the Merge, which did not happen.

Since ETHW is a fork of the original chain, people holding ETH before the Merge now have two copies of this asset. For example, if you had 1 ETH before the merge in your wallet, this will carry forward into the new PoS Ethereum chain after the Merge, and you will also have 1 ETHW token on the hard-forked chain.

Users can access their ETHW by adding a new network to their wallets.

The new coin is trading on several exchanges, including FTX, ByBit, Bitmart, and Plasma.Finance DEX.

The official website for ETHPoW has a list of 39 dApps currently running on the chain, including wallets, DeFi, and NFT marketplaces.

The list does not include the popular DeFi platform Aave, which has already committed to the Ethereum PoS chain and will not be available on ETHPoW, Chainlink or stablecoins Circle (USDC) and Tether (USDT).