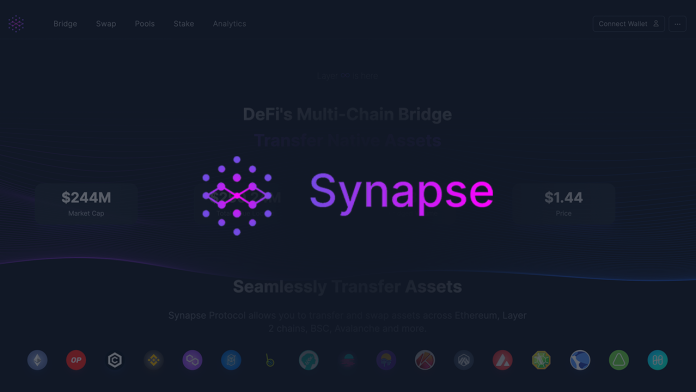 The need to bring crypto to the masses triggered a wave of different blockchains with their differentiating factors, based on the tradeoffs around the blockchain trilemma.

With over 100 different public blockchains, the critical question that arises is that of interoperability. As these individual islands of users, value and applications grow and compete with each other, it is becoming increasingly evident that bridging is needed to tackle the fragmentation and pave the way for the next generation of dApps that would work across chains.

Cross-chain bridges are the first step in this direction. The Synapse bridge allows for two types of asset bridging:

1) Bridging of wrapped assets across chains

Besides this, the Synapse SDK (software development kit) allows developers to take advantage of the underlying messaging protocol used in the bridge by integrating it directly into their dApps. By doing this, developers can create cross-chain DeFi applications like DEXs, borrowing and lending platforms, and yield aggregators, to name a few.

An example of this “generalized cross-chain messaging” is the creation of a custom bridge for the web3 game DeFi Kingdoms, which bridged over 10,000 NFTs between its chain and Harmony in the first couple of weeks.

It simplifies the development cycle for dApps as there is no need to create separate versions for different blockchains. It also streamlines the management of applications as now just one chain needs to be updated, reducing the complexity of smart contracts and lowering the system’s gas costs.

An optimistic rollup with EVM compatibility brings the best of both worlds. Not only are the transactions much faster and cheaper in a rollup, but the underlying base layer, Ethereum, also secures them. Besides this, working on top of Ethereum brings the Synapse chain (or any project) and the idea of going cross-chain to a vibrant ecosystem of existing dApps on the chain.

The first public testnet will be released in a few weeks and it will be fascinating to see how the diverse ecosystem of dApps on Ethereum reacts to it.

Apart from the Synapse Chain, the bridge protocol is also transitioning to a new version called V2.

With V2, the Synapse bridge intends to become a more general-purpose messaging primitive that would allow the movement of tokens or assets across chains and any other form of data. The team has learned from their experience of integrating DeFi Kingdoms and built upon its learnings to enable more such integrations in the future.

Most bridges today have a security model based on a multi-sig (2 out of 4 or 3 out of 5) consensus scheme. While this is better for user experience (as it is fast), it is not very secure, as evident from the number of bridge attacks related to compromised private keys in the past.

Synapse V2 will move away from its own M out of N consensus scheme to a new optimistically verified model, which is considered a better security model. This model borrows from the concept of optimistic rollups in which all transactions are deemed honest by default, and a collection of off-chain actors in charge of submitting fraud proofs during a predefined period are used to flag fraudulent transactions.

Optimistic verification requires a hacker to compromise every validator, which is not the case with M out of N, where only M validators are needed to perform an attack.

SYN (Synapse token) will provide economic security in the new optimistic verification paradigm. The token will become the incentive mechanism for the off-chain validators to reach a consensus on the validity of transactions.

Holders of the SYN token can now stake these with guards participating in securing the network. Also, all off-chain entities will receive transaction fees generated in the form of SYN.

The Synapse DAO has released the next steps they plan to take, which include:

5) Create and display some dApp prototypes built on the chain.

The world of DeFi bridges and cross-chain protocols is arguably the most susceptible to attack, albeit important in the blockchain ecosystem. Other players like Axelar and LayerZero have done notable work but more needs to be done as these new technologies get tested in the real world.

With the news of the new chain and V2 release, the SYN token increased by almost 40% to reach $1.79 before falling gradually to $1.30.