Why is Bancor’s Halt of Their Impermanent Loss Insurance So Important? 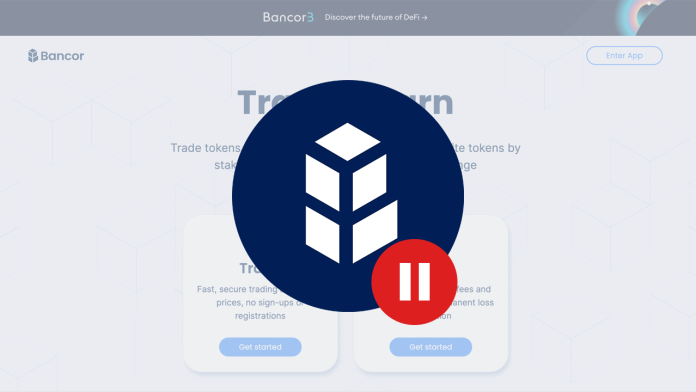 tl;dr Summary: Bancor, a defi staking protocol that offers insurance for impermanent loss, temporarily halted said insurance on June 19, citing “hostile market conditions” for the reasoning. Given that the IL protection is what Bancor is known for, and that Bancor is supposed to be decentralized, this move caused a lot of concern over the platform’s governance and transparency.

Update June 30: Bancor has released a statement regarding the situation and proposing a few possible solutions which will be proposed to the DAO for voting. In the meantime, withdrawals will still not issue BNT (thus their Impermanent Loss Protection is still halted, see more below). They’ve made it explicit that their reasoning is because BNT could have dropped to zero if it had to be issued to fill the gaps from the recent massive withdrawals, much like we saw happen with UST and LUNA.

In a similar move and for similar reasons as the Solend platform’s heated debate about how to manage a risky whale liquidity position, Bancor announced a contentious move to temporarily stop offering the impermanent loss (IL) protection that the platform is lauded for. They also disabled deposits to their liquidity pools. Withdrawals were still enabled, but people would not receive the BNT that they would have prior to the halt to cover any impermanent loss they experienced.

The reason given was a rather vague “due to hostile market conditions.” They claim the “IL protection will be reactivated on the protocol as the market stabilizes.”

It’s important to emphasize that trading is still possible on the platform, and that this is supposed to be a temporary measure to protect the users.

What were they trying to protect their users from?

On-chain data alerted the Bancor devs that major providers of liquidity—namely Celsius and 3AC, two other protocols that have suffered forced liquidation this month—had rapidly pulled out of the Bancor pools, causing the BNT token to devalue.

The value of the BNT token is important because it is what is used to cover any impermanent loss when a user withdraws their tokens from a pool. Basically, a user’s pool contribution is for one asset that is then matched with BNT, and the rewards gained from both will be paid out to the user when they withdraw if needed to ensure they withdraw the same amount they put in. You can read more about this mechanic on Bancor’s support page here.

Thus, if large providers of liquidity pull out, the value of the BNT token can lower as it is used to pay off the difference between the impermanent loss and the original asset allocation. BNT is also printed indefinitely to cover these LP pairings, which makes the token inflationary. Basically, the more BNT is created, the less value each token holds.

Not everyone thinks this is a bad solution that would indefinitely lead to a value-less token. As @lesigh3100 on Twitter suggests, the mechanics of the protocol itself have not failed:

This is a pretty unique system. Other types of impermanent loss protection rely on assets external to the pool itself and on fees that the users pay for transactions, which is less stable and won’t necessarily cover 100% of a user’s IL. However, the users in these types of pools need to allocate at least two assets to the pool, rather than the one that Bancor allows.

Having said that, Bancor actually does include external IL protection as well and uses user-paid fees to help cover the IL, so it’s kind of a hybrid system.

Some people have suggested that Bancor is thus a “shell game” and an inflationary “death spiral.”

However, whether or not the IL protection itself makes BNT inflationary is not necessarily a 1:1 correlation because Bancor uses their earnings from fees to cover the IL, and it is only if those fees don’t cover all of it that BNT is minted to cover the difference. There is also a burn mechanism in place for BNT, though it seems to not outweigh the mint mechanism.

Even lesigh’s analysis (see their Tweet earlier in this post) of the protocol functioning as it should is not necessarily a reason to say the protocol is doing the right thing. Some people have countered this type of argument by saying that LUNA’s protocol did exactly what it was supposed to do as well, and that was ultimately its death.

Of course, there is also concern that the core feature of Bancor is the IL protection, and the fact that they can just turn it off shows that the platform is not fully decentralized and also that it won’t always do what you signed up for.

Likewise, popular crypto commentator Cobie suggests that they turned off the protection precisely when it was needed most:

What’s interesting about this halt to the insurance is that withdrawals on Bancor require a 7 day wait from the time the withdrawal request is submitted to when the funds can actually be withdrawn. This is what initially alerted the Bancor team to the impending withdrawals that would liquidate the platform (namely of ETH and LINK).

After seeing these pending withdrawals, Bancor basically said: “We can’t afford this so we’re halting the IL protection immediately,” though not in those specific words.

They wanted to protect their community from the fallout of these liquidity pools being empty.

Glenn, a governance member on Bancor, noted that:

Bancor does indeed have a DAO, but this emergency action to halt IL protection was done without a vote. How? BIP21 was a governance proposal that passed which gave retroactive approval for this sort of action. There are user concerns that it wasn’t clear this proposal would allow for halting IL protection.

It’s not possible to talk about this without bringing up the Celsius and 3AC issues.

Celsius paused all withdrawals on their network because they couldn’t afford them either. Whether intentional or not, they also blamed “extreme market conditions.”

Three Arrows Capital (3AC for short) had a major liquidation and are facing insolvency, which basically means they can’t pay back the folks who lent them money.

You can listen to the Bancor Community AMA that occurred on Jun 19, 2022 explaining their side of the situation here.

Last week, we covered the Solend governance decision to take control of a whale’s wallet that threatened their ecosystem, and the vote that came after to reverse the decision. The similarities are striking in that a central group of people decide to alter the protocol they operate with little to no warning, and then after the fact ask their community if it was the right decision.

Is this really a democratic process? If the citizens of a country elect a president, the government employees can’t just say “oh, we didn’t like this outcome, so let’s put a vote to see if the people want to undo this.” Why is the same sort of vote an acceptable action on a decentralized governance platform, then? Or, is it? Clearly, the Bancor and Solend communities are split on their feelings about this style of governance also.